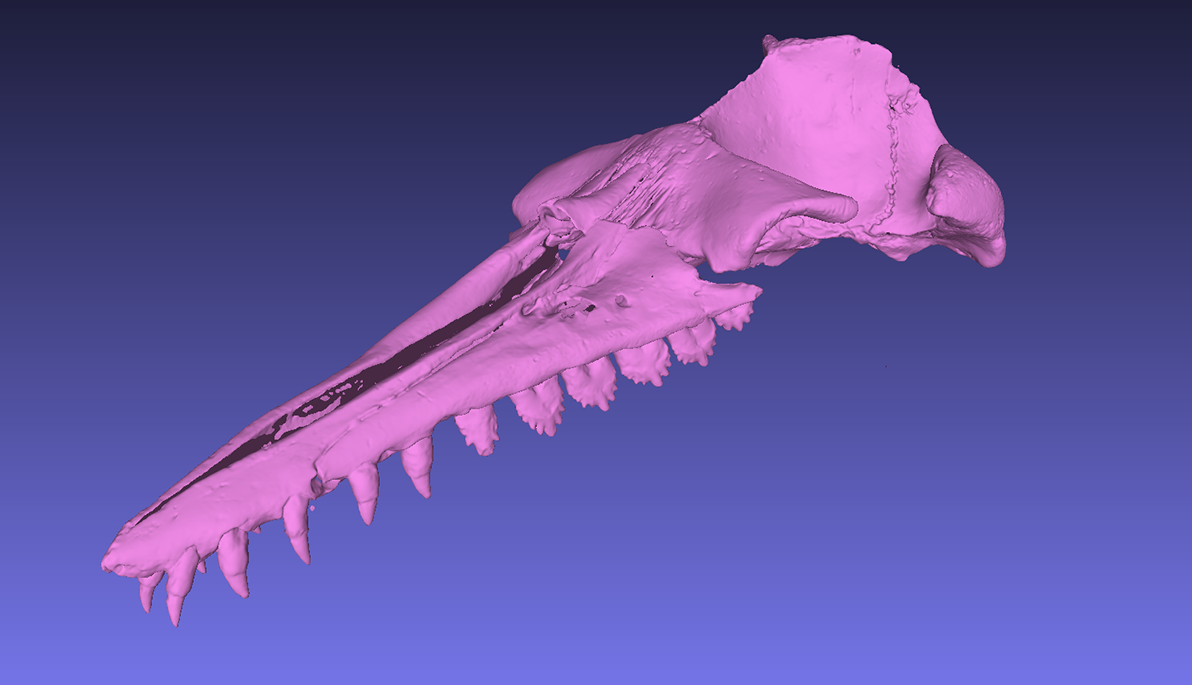 Surface model of the skull of Coronodon havensteini, an early toothed member of the group that includes modern baleen whales. The species lived 30 million years ago.

Approximately 66 million years ago, an asteroid collided with Earth, causing the extinction of three-quarters of the planet’s species, including large dinosaurs and small mammals that roamed alongside them. Following this cataclysmic event, mammals began to rapidly diversify, including new placental mammals (mammals that develop within a placenta).

The study, which was led by Professor Anjali Goswami of the Natural History Museum (London), could help to predict how quickly species respond to environmental changes and their capacity to evolve. As climate change threatens to impact animal habitats and species survival rates, the findings could become especially relevent.

Across Time and Taxa

The researchers examined how different placental mammals responded to rapid changes in their environment and determined which characteristics or behaviors were associated with faster evolution. The team analyzed 3-D scans of 322 specimens housed in more than 20 international museum collections. By collecting data on the skulls of all major placental mammal groups (both living and extinct), the researchers gained an in-depth look across time and taxa to determine the factors that drove the initial “burst” of mammalian diversity.

They found that the mass extinction 66 million years ago was followed by a burst of diversification that gave rise to the ancestors of many of today’s living mammals, including humans. However, after roughly 100,000 years, species diversification slowed dramatically, and although later incidents of faster evolution do occur, their impact became smaller over time and never matched the speed first achieved during the initial peak. While the exact timing of these later bursts is still unknown, they were likely caused by other periods of rapid environmental changes, such as sustained climate change and global cooling.

The data also showed that social structures vastly distinguish how quickly mammals evolve. As Beatty explains, social mammals were found to evolve at a faster rate than solitary mammals, and hoofed mammals with horns and antlers for fighting and social display also appeared to evolve faster.

“One of the findings shows that social animals have a faster rate of cranial evolution than asocial animals. This is probably driven by the way that many animals use cranial ornamentation, such as horns and crests, to signal to potential mates or competitors. This is a common theme in many reptiles, birds, and mammals, and it really shows in these data,” says Beatty. “The other groups that exhibit rapid growth, but aren’t social, are cetaceans, which include whales, dolphins, and porpoises, and sirenians, which include manatees and walruses. These species underwent extreme environmental pressures on their skull shape, which likely accelerated the rate of their cranial evolution.”

The researchers also found that parental care impacted evolution rate. Placental mammals that are mobile upon birth and require little primary care, like horses and antelope, were found to evolve much faster than those reliant on caregivers during infancy, like primates and carnivores. In addition, the findings suggest that species dependent upon a strict schedule, whether nocturnal or diurnal (awake mainly during the day), also evolved slower than animals without a fixed activity pattern.

Surprisingly, rodents and bats, which are the mammal groups with the most species, appeared not to evolve quickly. This finding suggests that diversity in skull shape and number of species are not linked in mammals.

The researchers also predicted what the skull of placental mammals’ ancestor may have looked like. As Geisler explains, this insight may help to solve one of the longest-standing and most debated questions in mammalian evolution.

“Genetic data from living species suggest that placentals emerged much earlier than the oldest fossil placentals, and some have suggested that paleontologists are simply not identifying fossil species correctly,” Geisler says. “Although our study does not resolve this controversy, our skull reconstructions for the placental ancestor look a lot like those of an extinct group of small, insectivorous mammals from North America called leptictids. With this in mind, paleontologists can take a closer look at leptictids to see if this discrepancy can be resolved.”

In the face of global climate change, Watanabe concludes that the study’s findings are more relevant than ever.

“Large-scale studies like this provide important insights on how different animals respond to a changing world—both in the deep past as well as in the future. This includes our ability to adapt to the global climate change we’re facing now,” he says.