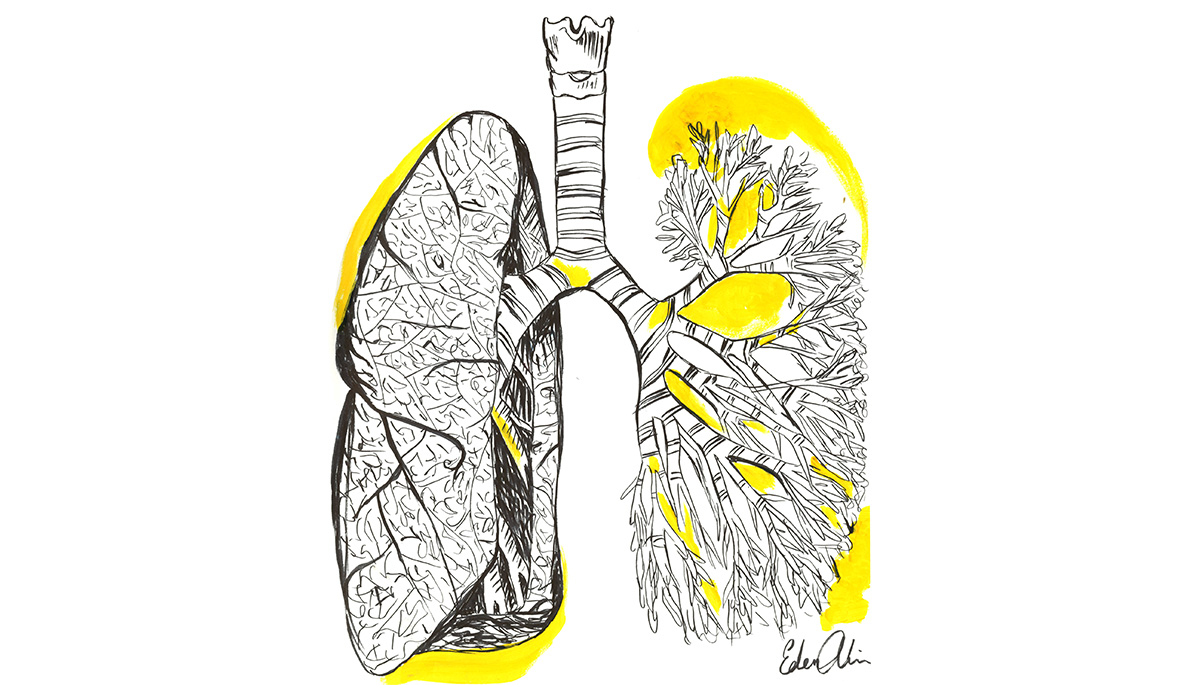 More than 500 years ago, famed artist and scientist Leonardo da Vinci created “The Vitruvian Man,” a drawing that helped to bridge the gap between art and science. Today, students at the College of Osteopathic Medicine (NYITCOM) continue to “draw” upon da Vinci’s legacy by creating their own anatomical works of art.

What began as an experiment led by NYITCOM Assistant Professor of Anatomy Julia Molnar, Ph.D., is now ARTery, the Art in Medicine Interest Group. In 2017, Molnar and former Academic Medicine Scholars Craig Biegel (D.O. ’20) and Arnavi Varshney (D.O. ’20) launched a study to see whether sketching anatomical structures could help medical students improve their anatomy test scores. After dissecting cadavers in the anatomy lab, students in the experimental group would sketch the organs and body parts from the day’s lesson. While the test scores between the experimental and control groups were not drastically different, the study did have an unexpected result: the medical students wanted to keep sketching.

Today, approximately 100 medical students are involved in ARTery, which allows students to leverage art as both a creative outlet and study tool. The group meets regularly in the W. Kenneth Riland anatomy laboratory—in scrubs—to sketch various muscles and cadaver structures, usually using pencil and paper. These “meetups” reinforce anatomy lessons and provide medical students with an opportunity to take a break from their studies and appreciate the generosity of the body donors. ARTery illustrations have also served as cover art for the medical school’s Body Donor Memorial Ceremony program.

Academic Medicine Scholar Mahima Mangla, who has a background in art history, was thrilled to find the opportunity at NYITCOM to blend these two fields so meaningfully.

“I felt like the cadaver donors had just given us so much,” said Mangla, who assists Molnar with anatomy lessons and served as ARTery’s first president for the 2019-2020 academic year. “While learning the medical sciences, our sketches also allowed us to memorialize the donors in an even more powerful way. For me, it was almost therapeutic. Not only did I learn about anatomy, but I really felt like sketching was allowing me to blend medicine and the humanities.” 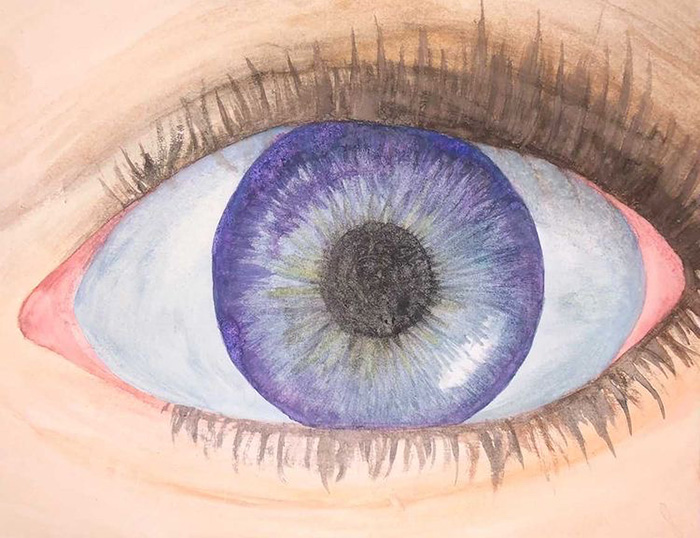 Various studies have shown that writing information down helps with retention. Similarly, sketching anatomical structures may allow some medical students to better comprehend their anatomy lessons. This includes spotting anatomical differences caused by different pathologies. For example, medical students were once tasked with depicting renal hypoplasia, a condition in which a kidney does not fully develop. Sketching the structural variations helped the future physicians compare and contrast the underdeveloped organ with a fully formed kidney.

“In these sessions, we’re discussing anatomical variations, and we’re discussing the relative size of structures and their anatomical relationships to each other,” says Molnar, who serves as the group’s faculty advisor. The illustrator-turned anatomist also has the ideal background to lead this charge. She boasts an undergraduate degree in fine arts from Maryland Institute College of Art, a master’s in medical illustration from Johns Hopkins University, and a Ph.D. in comparative anatomy from the Royal Veterinary College in London (United Kingdom).

The ability to depict medical scenarios can also allow physicians to better communicate with their patients. Even da Vinci said his drawings were more impactful than descriptive words alone. Clinicians may use sketches to help patients and their families understand test results, prognoses, and other scientific concepts. During these stressful moments, simple, visual explanations can resonate better than medical terminology, which can often be daunting for those who are already concerned about a loved one. Illustrations can also help physicians communicate more effectively with non-native English speakers.

For Mangla, who aims to practice medicine with a patient-centered approach, drawing has been a vital communication tool during clinical rotations. She has used sketches to educate patients, including one scenario where she sketched the four chambers of the heart to explain a patient’s electrocardiogram (EKG) results.

As it turns out, NYITCOM’s students are not the only ones who see ARTery’s value.

“We also had really good participation from the faculty who would join and facilitate these sessions,” says Molnar. “We had a lot of the anatomy faculty join, some of whom are really talented artists, and some who simply shared their anatomy skills and knowledge. It can be a really productive conversation to talk about an image with an anatomist.”

NYITCOM’s Department of Osteopathic Manipulative Medicine (OMM) has also opened up its doors for ARTery events. In years past, sessions organized by ARTery have enabled medical students to sketch in the OMM lab. These sessions have helped to reinforce their knowledge of musculoskeletal science. 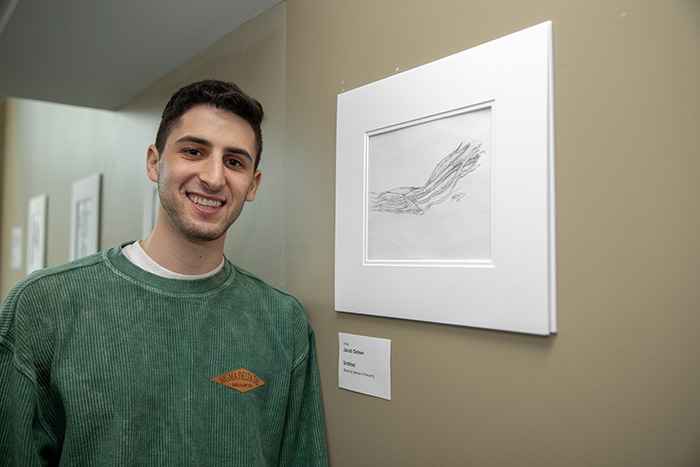 Last year’s ARTery President Jacob Salner poses with his anatomical drawing during the 2020 Humanities in Medicine Week in Serota Hall. Salner’s drawing shows the brachial artery, radial artery, and other key structures in the human arm.

In early 2020, prior to the COVID-19 pandemic, the group’s artwork was displayed during NYITCOM’s Arts in Medicine showcase, appearing alongside projects from other creative and wellness-focused efforts, such as the Through the Lens photography initiative. Former ARTery President Jacob Salner and other interest group members proudly displayed 28 pieces of artwork, most of which were student submissions.

“The quality was absolutely stunning. We had a lot of wonderful sketches that have been done in the anatomy lab, but many of the students also took their sketches home and continued to work on them, polishing their artwork to a high degree,” says Molnar.

ARTery’s members continued their illustrations throughout the COVID-19 pandemic. When they were no longer able to meet in person, the group convened on Zoom.

In September 2021, they rejoined in person for an outdoor watercolor paint session at Morgan Park in Glen Cove, N.Y., where 30 medical students created vibrant, full-color depictions of the human eye. The paintings were shared on Twitter, where they caught the attention of the American Association of Anatomy, which featured the artwork in its October newsletter.

The outdoor event, dubbed “Watercolor on the Water,” was organized by current ARTery president Eden Alin, who is also exploring the possibility of holding workshop-style events with NYITCOM’s Culinary Medicine Interest Group and other student organizations. While the group has focused much of its attention on NYITCOM-Long Island, ARTery also plans to extend its reach by holding virtual painting and drawing sessions with community members from NYITCOM-Arkansas.

Most notably, Alin is seeking ways for medical students to explore additional methods of creative expression, suggesting that art can take many forms. For the collaboration with the Culinary Medicine Interest Group, she envisions foods like focaccia bread taking the place of a traditional canvas, as vegetables and toppings serve as “paint.” ARTery also continues to host guest speakers. One event featured Mike Natter, M.D., a New York University endocrinology fellow and artist, for a conversation about art in medicine, establishing rapport with patients, and what it’s like to practice in the endocrinology field.

“As osteopathic medical students, we’re taught to look at humans and the world from a different perspective. Sketching cadavers has afforded us the ability to do just that,” says Alin, who plans to pursue a residency in pediatrics after graduation. “This has been a foundation that our organization will continue to build upon. We’re excited to explore the many different ways in which fostering creativity will make us better future osteopathic physicians.” 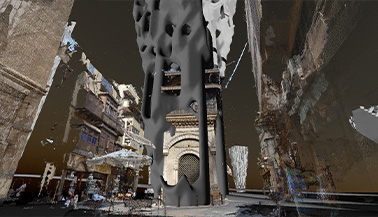 Master’s in Architecture, Computational Technologies Program is Taking Architecture into the Future 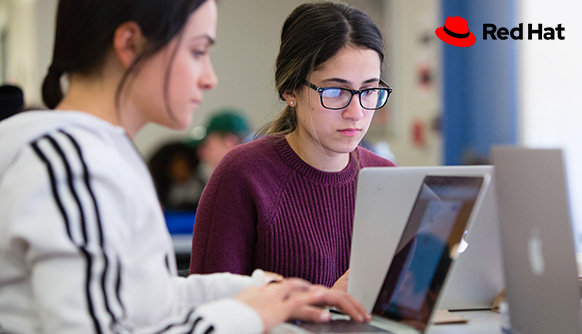 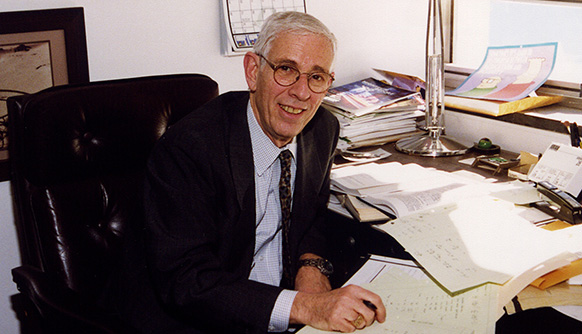 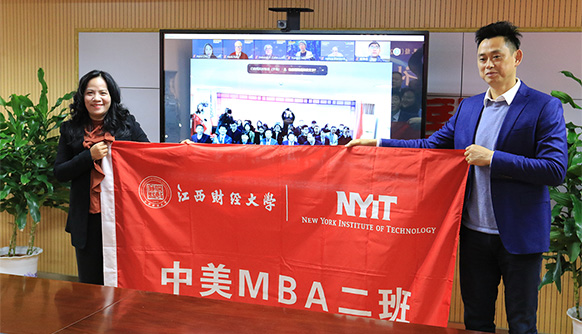